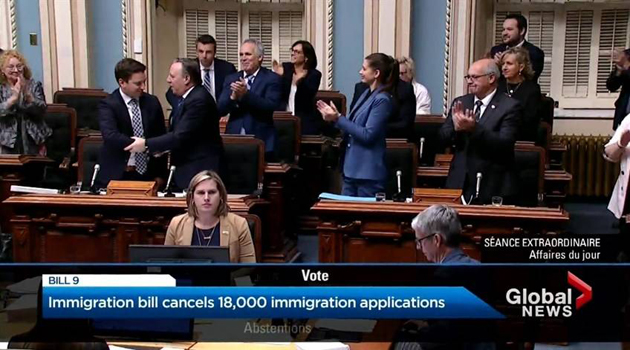 Is Quebec the most intolerant province in Canada? The majority CAQ government has passed two controversial bills that prohibit the wearing of religious symbols by state employees in a position of authority, toss out 16,000 immigration applications, and impose a values test on newcomers.

Taken together, the legislation sends a loud “not welcome” message to a wide swath of citizens, both established cultural minorities, and those hoping to join them in the province.

The first law is Bill 21. It imposes a secular dress code on a host of state officials, including police officers, judges, government lawyers, jail guards and most controversially, teachers. None can wear obvious religious symbols, though what that means has become the subject of debate and ridicule: last week, it was suggested that wedding rings might be banned, which Quebec Premier Francois Legault quickly refuted.

It is clear, however, that Muslim veils, Sikh turbans, Jewish kippas, and Christian crosses are all verboten. Teachers who currently sport religious attire may continue wearing it but should they be offered a transfer, promotion or new job, they will not be able to accept unless they remove their religious attire. Inspectors will have the power to enforce the new law, and “the targeted employee could be subject to disciplinary measures for failing to comply.”

Draconian? Yes, but part of a continuum that has a long history in the province. The idea of “secularizing” the state dates back to the 1960s, when Quebec’s Quiet Revolution broke the grip of the Catholic Church on both the levers of state power and people’s personal lives.