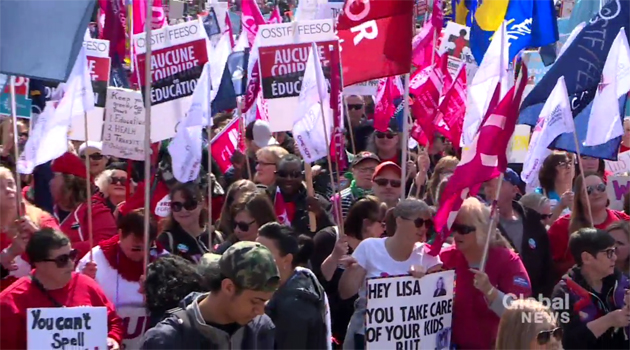 The daffodils may be out at Queen’s Park, but they could barely be seen amid thousands of demonstrators trampling the legislative lawn this weekend. They came to protest the Ford government’s revamp of the provincial education system, which would eliminate 3,475 teaching positions over four years, thereby saving $851 million.

The government says these cuts will be made through attrition, not layoffs, but the teachers’ unions aren’t buying it. They claim Ford plans to trim even more positions by increasing high school class sizes from an average of 22 to 28 students, and requiring students to take four e-learning courses to earn their diploma.

So they bussed in from all corners of the province, megaphones and placards in hand, joining forces with students, parents, and all manner of groups with an axe to grind against the current government. It was a back-to-the-90s moment, a reminder of when the Mike Harris government found itself under permanent siege by union demonstrators protesting cuts to everything from welfare to health care to education.

Like then, neither side shows any intention of backing down. Instead, there are signs teacher reductions may already be happening: in anticipation of funding cuts in the P.C. government’s first budget on Thursday, the TDSB has issued surplus notices to 1,000 high school teachers — a big increase from last year, when it issued 274 notices, and even from 2014-15, which saw 515 notices go out after reports of declining enrolment.